The Unity mostly traveled to the Windward or Upper Coast, the current Liberia, because prices here were low. Once The Unity arrived to the Windward Coast, a cannon shot was fired. This was the sign trading could begin. The Africans sailed to The Unity with trade goods, such as rice, water, gold, ivory and slaves. The food, goods and people were, amongst other things, traded for ammunition, weapons, knives, textiles and alcohol. In The Unity’s trade journal they kept track of exactly which goods were traded for objects and humans.

Discussion about then and now

You can find instructions about conducting a discussion in the Manual for Worksheets.

The slave trade from Africa to the America’s and the Caribbean was called the trans-Atlantic slave trade. These slave transports were also part of the so-called triangle trade: ships from Europe sailed with cargo to Western Africa, the goods were traded for Africans (and other products such as ivory and gold), the Africans were transported across the Atlantic Ocean to the West Indies where they were sold to work as slaves on the plantations. The ships returned with goods from Africa and from the plantations in the West Indies to Europe.
The peak of the triangle trade was in the eighteenth century. Trans-Atlantic slave trade took place between 1500 and 1870 approximately. In that period the Europeans transported roughly 12 million Africans from Africa to the America’s and the Caribbean. The Dutch were responsible for approximately 5% of the total trans-Atlantic slave trade: in the seventeenth through the early half of the eighteenth century they transported circa 600.000 African, approximately half were transported by the West India Company. The passage from Africa to the West Indies was a living hell for the Africans. Many of them did not survive the horrific passage. In total circa 460.000 of the Africans transported by the Dutch reached their destination. The Netherlands officially abolished slave trade in 1814.
The passage from Africa to the West Indies, the Middle Passage as it is now called, was the largest forced migration in history and has been declared a crime against humanity by the United Nations.

The passage from Africa to the America’s, the Middle Passage, was the most infamous part of the triangle voyage. Sailing for weeks on end without land in sight must have been horrendous. The Unity left Africa with 319 enslaved Africans, 33 crewmembers, 42 large barrels of fresh water, food supplies and firewood and nearly 4000 ‘Middelburg pounds’ of ivory. The journey across the Atlantic lasted nearly two months.

Warning: the images shown can be experienced as shocking.

The passage from Africa to the America’s, the Middle Passage, was the most infamous part of the triangle voyage. Sailing for weeks on end without land in sight, not knowing what was going to happen, must have been horrendous. Hundreds of Africans were stacked in the hull of the ship. Food and drink were rationed. Many slaves died during this Middle Passage. The journey across the Atlantic Ocean lasted nearly two months. 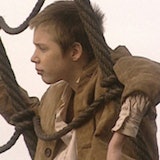 You will find the translation of the spoken text in the PDF-document below.