Western Africa - Along the Coast

Life on board was very structured. There was enough work to be done, such as cleaning, making repairs and keeping watch. Once the crew boarded the ship they were divided into watches. Almost every watch lasted four hours. The duration of the watch was measured by an hourglass, or glass. Each glass lasted half an hour. After each half hour the hourglass was turned over while simultaneously ringing the ships bell so all members of the crew knew half an hour had passed.

Warning: Some images shown can be experienced as shocking. 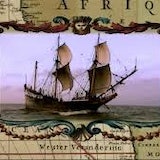 This short film is about the history of the triangle trade. Ships sailed with trade goods from the Netherlands to Africa to purchase slaves, gold and ivory (a barter system). Goods and enslaved Africans were shipped across the Atlantic Ocean to the West Indies (South- and North America and the Caribbean). There the Africans were sold as slaves to work the plantations. The ships departed from there to the Netherlands with their return cargo, mostly sugar, cacao, coffee and tobacco. The three boys in the film explore the history of slave trade. They ask experts questions and one of the boys has research done to learn from what country his ancestors originated.

Watch the episode about slave trade and the make the assignment.

The Unity’s voyage from Zeeland to Western Africa lasted well over two months. First The Unity sailed to the Windward or Upper Coast, then to the Ivory Coast and finally to the Gold Coast. The captain and first mate traded as much cargo for slaves, water and rice as possible. Per trade location the demand for goods and the supply enslaved Africans varied. Men were more expensive than women and boys were more expensive than girls. Gold and ivory were bought in addition to slaves.

Discussion about then and now

You can find instructions about conducting a discussion in the worksheet information.

Topics that may provide an opening for a discussion about slavery

In all parts of the world there was slavery: in America, Asia, Europe and in Africa. It was deemed normal. Soldiers who lost a war were killed or enslaved. This also often happened to their women and children. A person could also be forced into slavery when a debt could not be paid. Poor parents sold one or more of their children into slavery. Criminals were sometimes also sentenced into slavery.

In colonial times and during the time of trans-Atlantic slave trade, Europeans bought slaves from African traders. Cargo ships shipped the enslaved Africans to the other side of the Atlantic Ocean. The Africans who survived the passage were sold with a profit to the owners of the plantations in the America’s. There they were forced to work as slaves on the plantages.

Slavery is illegal nowadays. Slavery is considered a crime against humanity. This does not imply there is no more slavery. Millions or child slaves are used for slave labor in factories, in underground mines, on the land, in prostitution, in drug trafficking and are used as child soldiers. In 1989 the United Nations drafted the Convention on the Rights of the Child. In this attention was paid to modern forms of slavery, such as child slavery. An international organization dedicated to the protection of children’s rights is Unicef.

More information and questions about the discussion topic Slavery