Emigration from Zeeland for centuries

For centuries, people from Zeeland left the area to establish settlements, colonies, cities or communities, elsewhere. For instance, they emigrated to South-Africa, Indonesia, Suriname, North-America and Brazil.

Trade was an important driving force for emigration, especially those countries where the  Dutch East India Company (VOC) or the Dutch West India Company (WIC)  had trading posts, were popular destinations for the people from Zeeland. Soldiers, merchants, landowners and administrators, and their families would move to various foreign trading areas. In the 19th and 20th century, people from Zeeland primarily moved to North-America.

Since the end of the 16th century ships which belonged to the VOC have traveled to the East, subsequently passing Kaap de Goede Hoop (The Cape of Good Hope) in the South of Africa (modern day South-Africa). The journey was long and exhausting, and halfway through the crew would be in dire need of fresh food and medical aid. In 1651 the VOC decided to built a outpost to resupply and sickbay at the Cape. Wheat, vegetables, and fruit were grown, cattle was raised and sailors who were in need of medical assistance were nursed back to health. Farming families from The Netherlands settled in the area to build plantations. Enslaved Africans from West-Africa and Asians from East-Asia were used as cheap labor forces.

At the end of the 18th century, approximately 6000 people from the Netherlands, 5600 Germans and 2400 people from France inhabited ‘Kaap de Goede Hoop’(The Cape of Good Hope). At the time, they were more commonly known as ‘Boeren’ or ‘Afrikaners’. When the British occupied the Cape in 1795, the ‘Boeren’ organized a fierce resistance against the British occupation. They had objections against the English language becoming the only official language and the abolishment of slavery. As a consequence approximately 5000 Afrikaners took their oxen wagons and left the Cape between 1835 and 1840, in order to found their own independent ‘Boeren’ republic inland. Unfortunately, this development sparked conflicts between the British and the Boeren. Eventually, the British conquered several areas and established the ‘Unie van Zuid-Afrika’ (The Union of South Africa) consisting of the ‘Transvaal, de Kaap Colonie (The Cape), Oranje Vrijstaat (Orange River Colonies) and Natal’ in 1910.

The ancestors of former president of South-Africa Frederik Willem de Klerk originally came from Serooskerke (Walcheren), where they owned a smithy. After Pieter de Clerck died, his widow Sara Couchet left on a ship named the Oosterlandt, which belonged to the VOC, to Cape Colony along with her children Abraham, Jannetje and Joos in 1688.

Abraham, who became a sailor on the ship, is a far removed ancestor of the former president Frederik Willem de Klerk.

In 1989 Frederik Willem became president of South-Africa. After he was appointed, country reforms increased. In 1990, he announced Nelson Mandela’s release from prison and abolished most laws which previously upheld the apartheid system. In 1993 he and Mandela were both awarded the Nobel peace prize.

Ever since 1600, people from Zeeland were present in Suriname. Long journeys were made to benefit trade in South-American coastal area. But the Dutch had their rivals, for instance the English, Portuguese and French who also owned trading posts in Suriname. The first successful efforts in terms of colonization, were made by the English. However, during the Second English War (1665-1667) the English were driven away by a fleet from Zeeland. The English fortification near the city of Paramaribo was renamed Fort Zeelandia. Additionally, Paramaribo was temporarily given a new name as well: New Middelburg (Nieuw Middelburg.)

Sold to the WIC

Because Suriname turned how to be an expensive colony to maintain, the people from Zeeland decided in 1682 to sell its rights to the WIC for about 260.000 gilders. A governor was appointed in order to make sure that proceedings on the island went according to schedule. The man for this job was Cornelis van Aerssen van Sommelsdijck, whose ancestry can be traced back to Zeeland. From 1683 onwards, his goal was to strengthen defenses and to establish peace with the Indians. The colonists kept expanding the territories of their plantations and bought enslaved Africans from merchants such as the WIC and the Middelburgse Commercie Compagnie (MCC). In turn, these merchants bought the enslaved Africans in West-Africa. The plantations produced products like coffee and sugar, which were then sold on the Dutch market for instance.

When slavery was almost abolished around 1850, the plantations had to deal with a significant labor shortage. There was a large demand for cheap labor forces who were used to intense manual labor in a warm and humid climate. At the end of the 19th century and the start of the 20st century a wave of Asian contract workers came to Suriname to work on the plantations. A couple of thousands Chinese people arrived primarily between 1858 and 1870, ten thousands of British-Indian people arrived between 1873 and 1916 and a wave of inhabitants from Java arrived between 1890 and 1939. Many contract workers stayed in Suriname and started a new life here. For instance the Hindus, descendants of the British-Indian immigrants, are nowadays the largest community and make up 40% of today’s population in Suriname.

Parbo-beer: Invented by brothers from Zeeland

The Parbo brewery from Paramaribo, which controls about 90% of the beer market in Suriname, has its roots in Zeeuws-Vlaanderen. Two brothers, Arthur and Piet Dumoleijn owned a beer brewery in Kloosterzande (Groenendijk). When their business was becoming less successful after the Second World War, the brothers took a risk and decided to begin a new brewery in the tropical country of Suriname.

The Amstel Brewery responded to the Dumoleijn brothers’ plan with enthusiasm and decided to provide them with financial aid. The contract was signed in 1954 and within a short time span Parbo already managed to own 75% of the beer market in Suriname.

The amount of people from Zeeland who moved to the promised land that was North – America was substantial. 21% of all Dutch citizens who moved to North-America between 1831 and 1877, which comes down to approximately 13.000 people, came originally from Zeeland. Most people from Zeeland came from the regions of ‘Duiveland’, ‘West Zeeuws-Vlaanderen’ and ‘Zuid-Beveland.’ One of the causes for this increase in migration were the economic, social, and religious circumstances in The Netherlands around 1845: these were especially unfavorable for the farmers. Other causes for migration were potato crop diseases, diminished prices for agricultural produce, a high child mortality rate, bad hygiene, high taxes and in short, no hope for better living conditions. Finally, the religious marginalization of the ‘Afgescheidenen’ who seceded from the Dutch Reformed Church in 1834, gave these emigrants even more reason to leave The Netherlands.

Rich farmer from Borssele founds the town of Zeeland, Michigan

‘The Netherlands will perish due to moral decay.’ (‘Nederland gaat te gronde aan zedelijk verval’.) This was the message that rich farmer Jannes van de Luijster preached among his fellow villagers. It was time to find a new place. In cooperation with pastor Cornelis van der Meulen, also known as the Apostle of Zeeland (‘d’Apostel van Zeeland’), a well-thought-out plan was made to emigrate to America with a large group of ‘Afgescheidenen’ (a seceded congregation of the Dutch Reformed Church). Once they arrived in America, their goal was to found their own new community.

Van de Luister sold this thriving agricultural business in Borssele for almost ƒ40.000,-. With this new fortune he was able to: finance the journey to America for a large group of poor people from Borssele; buy large plots of land in Michigan and found the town of Zeeland. In turn, he sold the land that he acquired to his fellow travelers, offered loans with a twenty year amortization period and did not ask any interest in case prospective widows would not be able to afford it. He also financed the necessary infrastructure: a paved road to the city of Holland, a church, a school and an post office. This resettlement or ‘landverhuizing’ was successful due to the combination of careful preparations, prior experiences, financial support and strong leadership.

For a long time it was impossible to find even a single drop of alcohol in the town of Zeeland. For over 100 years, this town has been ‘sober’. In 1905, local anti-alcohol legislation passed, partially thanks to the successive efforts of a significant amount of women who lived in the city and who demonstrated in favor of this new law. In their opinion alcohol could only bring about misery: husbands who abused their families, which resulted in broken families. However, several liquor stores, who ran successful businesses with the ‘Zeelanders’ as customers, were located near the municipal border of Zeeland.

The ancestors of the American President Roosevelt are most likely from Tholen. Franklin Delano Roosevelt took the oath of presidency in 1993 while holding his hand on a Dutch family bible. However, Roosevelt himself, did not speak Dutch. His far removed cousin, Theodore Roosevelt, president of the United States in 1901 until 1909, used to speak Dutch during church in his childhood years.

Furthermore, the ceremony for the Four Freedom Awards, an annual prize for persons who stood out for actively advocating and preserving the four freedoms from Roosevelt’s so called Four Freedoms-speech which was addressed to the Congress on January 6th 1941, is held by the Franklin and Eleanor Roosevelt Institute in New York in odd years while they take place in even years in Middelburg and are organized by the Roosevelt Stichting. Middelburg, as capital of Zeeland, was chosen to commemorate F.D. Roosevelt’s roots in Zeeland.

After the Portuguese discovered Brazil in 1500, the French, English and Dutch consequently tried to create settlements in the area. The Dutch were draw to the salt of Brazil (setúbal), an incredibly important export product at the time, which the Dutch would use to preserve fish. In 1624 the Dutch naval hero and privateer Piet Hein managed to conquer the city of Salvador. As a result, the city was governed by the Dutch West India Company for 25 years. However, the costs of creating new settlements were to high, therefore the Dutch did not colonize nor expand further into Brazil. This was only one of several reasons why all Dutch territory in Brazil was sold to the Portuguese for 8 million guilders in 1661.

During the massive increase in migration during the nineteenth century, Brazil was also one of the countries which looked promising in terms of offering it’s inhabitants a new and better life. Between 1858 and 1862, the Brazilian government managed to lure approximately 504 people from ‘West-Zeeuws-Vlaanderen’ to Brazil while using promises such as ‘free plots of land.’ A sizable portion of this group settled in district Holanda. There were employed by large landowners, whose slaves taught them agricultural techniques and methods. Later on, they would grow produce on their own lots, however this was barely enough to be successfully called self-sustaining. Even their descendants had trouble being self-sustaining in this new environment.

In 1978 a reporter of the journal ‘De Stem’ visited the people from Zeeland in Brazil and wrote an article about the hardships of the emigrants. The people in Zeeland were shocked and started various charity committees to provide financial aid. Eleven years later, the ‘ Zeebra’ organization dealt with matters regarding the descendants of the Zeeuws-Vlamingen. As a consequence, an increasing amount of descendants moved out of Brazil to seek their fortunes elsewhere.

Do you want to do your own research on emigrants? Read more on these pages 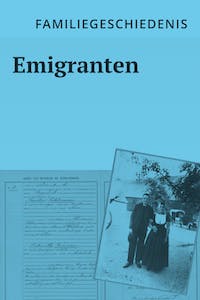 Zeeland immigration to the United States and Canada