Sjef van Dongen moved to Spitsbergen, with his parents and siblings, in 1923. His father worked for a Dutch coal mining company and Sjef also became employed at this company.

The everyday life of the Dutch community at Spitsbergen was very solitary. Hunters were the only other type of inhabitants of Spitsbergen, in addition to the miners and their families. These so-called ‘vangstmannen’ (catchmen) hunted local bears and foxes.

Sjef van Dongen (Josephus Maria Andreas Cornelius van Dongen) was born on March 30th 1906 in Haarlem. His parents came from Waalwijk, in later years the family would move to Rotterdam and they would eventually move to Tilburg. Sjef lived in Tilburg for 10 years, with his parents, two sisters and two brothers.

In 1922, his father left to Spitsbergen for a year. He had a job as supervisor of the Nederlandse Spitsbergen-Compagnie‘s (Dutch Spitsbergen Company) provisions warehouse, otherwise known as the ‘Nespico’, a limited liability company. The following year he also arranged a job for Sjef as office clerk. In September 1923, the remainder of  the Van Dongen family moved to Spitsbergen. First they took a boat to Hamburg, where explosives (which were useful for the mining business) were loaded onto the ship, then they continued onwards to Spitsbergen via Norway.

Spitsbergen became Norwegian territory in 1919 and was controlled by the governor or ‘Sysselmand’ in Norwegian. The island was occupied by both employees from several different mining companies and fishermen and hunters (who were called ‘vangstmannen’). In addition to the Dutch, there were also people from Norway, Sweden, and Scotland who lived and worked in Spitsbergen. Furthermore, coal was not the only resource which was pursued  by the mining business, the miners on Spitsbergen also mined to some extent for: zinc, marble and plaster.

The Nespico was founded in Rotterdam in 1919. Initially, the company only took over a pre-existing coal mining company (Isefjord Kulkompani Cap Boheman). However, in 1920 they also took over the quarry near  Barentsburg. The town of Barentsburg was originally a Dutch settlement, founded by Willem Barentsz, who used to be a renown whaler. Moreover, Barentsburg is located near Green Harbour, a side-fjord of the giant fjord which almost divides Spitsbergen in two different parts.

The Nespico mining company was the largest coal mining company on Spitsbergen. In 1926, the company had around 200 employees who lived with their families in the village of Barentsburg. Another Nespico plant was located in Adventbay, which lies approximately 70 kilometers away from Barentsburg. During Sjef’s time at Spitsbergen, this plant was kept operable despite financial losses. A third plant was located in Kingsbay, however this one was closed down after a relatively short amount of time.

Nevertheless, during the 1920’s an increasing amount of coalmines was abandoned due to out breaking fires, or due to the difficult and therefore expensive means of transportation neccesary for materials and products. Finally, a lack of financial resources provided yet another reason for the shutting down of many coalmines. The Nespico similarly encountered difficulties. During the fall of 1926, the mine in Barentsburg was closed down due to a combination of remarkably high transport costs, a low price of coal, and a lack of working capital.

Isolated from the world outside

The communication and transportation lines between Spitsbergen and the European mainland were far from ideal. All forms of transportation between Spitsbergen and Europe took place by bulk carriers. These large ships transported coal from the different companies on Spitsbergen, which were all involved in the local mining business. Moreover, a fixed or standardized governmental service line between Norway and Spitsbergen did not even exist. Even the mail had to be delivered by bulk carrier ships. Once the mail arrived on Spitsbergen, post offices turned out not to have fixed locations as well. The Norwegian government  therefore stationed post officers at operational coal mining companies. For instance, during the month of May 1928, there were post officers stationed at the radio-telegraph station in Green Harbour (3 kilometers from Barentsburg), Store Norske in Adventsbay and in Kingsbay. The government expected the different companies to reimburse the stationed post officers.

Besides mining companies, Spitsbergen was also the home country of hunters or which were alternatively named ‘vangstmannen’. During the summer, the hunters would be employed by several different companies on Spitsbergen. They would hunt birds such as ducks and geese, or they would travel to Norway. In September the hunters would go to little huts which they had made themselves. These little huts became their base of operations for hunting and consequently became their homes where they would stay the entire (!) winter season. The hunters started with collecting driftwood, then they would built or repair their huts and start a provisions supply. The hunters made sure to only carry the necessary amount of provisions, meat was to be shot on the spot (primarily deer). From November until mid-April the hunters would primarily target white and blue arctic foxes and if possible they would look for bears as well. During the spring, from May until July, they would hunt on seals and gather eggs and fluff from feathers from birds’ nests.

Foxes were caught with traps and sometimes with poison (strychnine) as well, however this was prohibited by law in 1927. Bears were shot or lured with a piece of bacon. Once the bear would grab the bacon, a gun would fire automatically, shooting the animal in the head or in the chest with a bullet. While, foxes were shot in order to collect and use their fur, seals were also hunted for their fur. However, the primary reason to hunt seals was their meat. Bears were, once again, also mainly hunted for their fur. Bear meat would be considered for private use only. During Sjef’s stay at Spitsbergen, the hunters would also target deer for their meat, however this was officially forbidden –  since the animals were almost extinct.

Usually, everything which was caught by the hunters would be divided into shipments and shipped off to Norway. Sometimes,  a small amount of foxes’ furs would be sold to companies in Spitsbergen. However, it’s main market was located in Tromso, Norway. Sjef wrote the following with regard to the hunters on Spitsbergen: “Because of years of training, the people have acquired at least a lot of perseverance, and they have become hardened against the wind and the weather. Due to their lifestyle which lacks change, they’ll become indifferent and closed off. You could write books about these hunters and their lives.” (“Durch Jahrenlange training sind es meistens Leute mit guten Ausdauer, gehärtet gegen Wind und Wetter. Durch dat Abwechselungsarme Leben werden sie meistens gleichgültig und verschlossen. Ueber Fangstleute und ihren Leben könnte man aug Bücher schreiben.”)

With regard to fishing and catching whales on Spitsbergen, the hunters would solely hunt  salmon. At best, they would catch small amounts and primarily used it as a way to pass time. During Sjef’s time in Spitsbergen, whaling had become incredibly unpopular. While trying to catch whales, the fishermen would use a boat as floating whale hunting station, since fixed whale hunting stations were difficult to reach. ‘Radio’ in Green Harbour was the only fixed whale hunting station, but it was already out of use during Sjef’s stay at Spitsbergen. The whales would be hunted for their meat and their whale oil, which could be sold. In the early days of the whaling business, the  bones would be processed into guano, while the meat could be consumed. 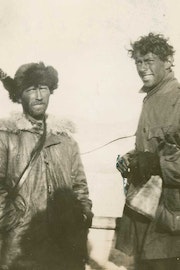 How an average Dutch man became known as Hero of the Artic in 1928. Sjef had risked his own life to save others and gave lectures about his adventures throughout The Netherlands for years on end. 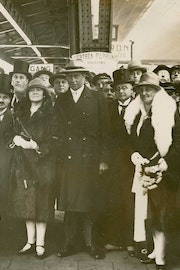 Everybody is deeply touched by the story of Sjef van Dongen. An average boy who does something heroic at Spitsbergen; Sjef becomes a role model. His popularity in the Netherlands remains unequalled.