What happened aboard a slave ship? The Zeeland Archives have made a blog about the voyage of the MCC ship The Unity during the years 1761-1763. Using the authentic archive documents, its journey can be followed day by day.

The blog charts The Unity‘s voyage by means of an interactive map and timeline. Each day’s events are reconstructed on the basis of original archival documents: the logbook kept by the first mate, the letters the captain sent to the directors, the journal of the chief surgeon, the statements made by the ship’s council, the letters from correspondents, etc.

A 3D reconstruction of The Unity was made based on archival data, as well as reconstructions of the ship’s length and cross-section, showing what an 18th-century slave ship looked like. The large amount of information from the archival documents has been made transparent with infographics. 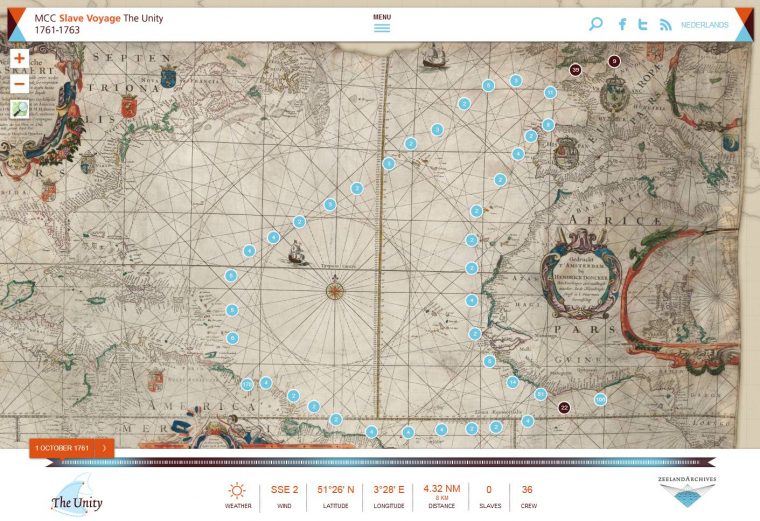 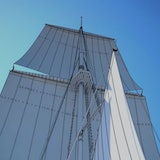 Lessons and excercises in PDF format, all relating to the blog on the slave voyage of The Unity, designed for primary and secondary schools

Archives of the MCC

In the second half of the 18th century, the Middelburg Commerce Company (MCC) focused on the triangular trade between Middelburg, the coast of West Africa and the Caribbean. This form of human trafficking, where Africans were sold in the Caribbean, is referred to as triangular trade or transatlantic slave trade. The archives of the MCC have been preserved. As they form a unique source of information, they were placed on UNESCO’s world heritage list for documentary works, in the Memory of the World Register.

Outreach of the blog

On 1 October 2013, exactly 252 years after The Unity set sail from the Netherlands, the Zeeland Archives launched the blog. On 28 March 2015 – after a year and a half, the average duration of a triangular voyage – the last day of the journey was published.

During these 18 months, the blog reached more than 52,000 visitors, who were able to closely follow how the captain of The Unity was conducting his business. On the coast of West Africa, the captain traded merchandise for 326 people, 33 of whom died during the voyage. He sold the 294 survivors to plantation farmers in the Caribbean. The trip earned the MCC a profit of 13,320 guilders, which would today be converted to approximately 137,725 euros.

In March 2015, at the invitation of the United Nations, the Zeeland Archives gave a presentation about the MCC archives and the blog about the slave journey of The Unity during the 28th session of the Human Rights Council in Geneva.