Middelburg after the bombardment, photographed by C.P. Snijders

Middelburg resembled a moonlike landscape, craters now replaced once significant governmental buildings. Ruins were all that was left of shopping streets and squares. This is the image of the destroyed capital of Zeeland which Corneel Pieter Snijders, local photographer, captured in the summer of 1940.

Corneel Pieter Snijders was born as the son of a shoemaker in Middelburg in 1882. Initially, he made a living as salesman. During his travels, however, he took pictures. Many of these featured farms such as the “Hof Nieuwland” in Nieuwland and the “Vredehof” in Kats or buildings which were about to be demolished like the ferry-house near the “Sloe” area in Middelburg. (The ferry-house was deconstructed in 1913.) Alternatively, he also photographed the “Witte Zwaan” inn located in Sint Joostland, which was deconstructed in 1918.

In 1920, Snijders was arrested on suspicion of financial forgery. He confessed to forging 250 “zilverbonnen” of one guilder. His forgeries were fabricated from paper which belonged to his employer, the Van Straaten printing company in Middelburg. A team of detectives was supposed to investigate the case, but it took a long time until the investigation proved successful. The circulation of Snijders’ false banknotes even reached the national news broadcasts. After being sentenced to jail, Snijders continued his efforts as photographer.

On may 17th 1940, a large part of Middelburg was destroyed by German artillery and a successive out brake of fire. A large part of the city burned down. The rubble was cleaned up as soon as possible; streets were cleared and building materials were gathered for reconstruction. The piles of rubble and the clearing process were captured in photographs by Snijders in a series of 33 stereo photos.

Commissioned by the Germans?

Why and for whom did the photographer make this series? For the German occupant perhaps? Reports from the “Vrije Stemmen” journal of april 9th 1946, make clear that he was working for the Germans and the German partisans during the war. Snijders, as well as his wife who was called the derogatory term of “NSB-ster” in the newspapers, was incarcerated after the liberation of Zeeland.

The newspapers made reports of the tribunal in Middelburg, which was especially organized for the trial of war criminals and German sympathizing citizens. Snijders was accused of multiple offenses:

It is therefore plausible that the photographer made this series of stereo photos as a German commission.

In front of the judges, however, Snijders showed remorse and declared that he did not considered himself to be a German sympathizer. He was sentenced to incarceration, for the same amount of time which he already spend in custody. Additionally, his citizen rights were revoked and his belongings were confiscated. (His belongings were distributed amongst evacuees during the flooding of Walcheren.) Snijders passed away in 1963 in the city of Goes.

Visit Middelburg during the summer of 1940…

The photographs by Corneel Pieter Snijders are preserved in the collections of various heritage institutions in Zeeland. The series constituting 33 stereo photos, is part of the collection “Beeld en Geluid” at the Zeeland Archives. The collection can be found with inventory number 131. Please take a look at his selection of photographs below and travel back in time for a visit to Middelburg during the summer of 1940…

Above mentioned article is an edited and translated version of the previously published article, which appeared in Zeeland, magazine of the Royal Society of Science in Zeeland,  year 20, no. 2, June 2011: R. Goudbeek, Middelburg na het bombardement, vastgelegd door Corneel Pieter Snijders.

Additional information regarding the pictured persons and locations is highly appreciated

The photo series by C.P. Snijders, with inventory number 131, is part of the collection "Beeld en Geluid". Consult the inventory. 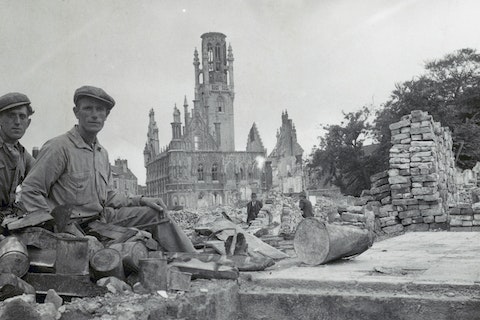 The destruction of Middelburg on May 17th 1940

On May 17th 1940, the majority of the historical center of Middelburg was destroyed. In 2010, this almost entirely "forgotten bombardment" was extensively commemorated.