The destruction of Middelburg on May 17th 1940

The Netherlands becomes involved in the Second World War on may 10th 1940. Five days later, the country surrenders to the German occupant. However, in the province of Zeeland as aided by the French, the battle continues. Moreover, a large part of historical city center of  Middelburg burns down as a result of the gunfire of may 17th 1940. This relatively ‘forgotten bombardment’ was commemorated extensively in 2010.

On may 10th 1940 our country becomes involved in the Second World War (1940-1945) after German troop breach the sovereignty of the Dutch borders. This violation of the Dutch neutrality meant that the Netherlands, for the first time since over a century, became involved in a war in Europe again.

The German plan of attack on the Netherlands initially entailed the avoidance of a confrontation with the Dutch on the waterfront. Instead, the Germans used large scaled airborne assaults to infiltrate Fort Holland. During the first hours of the battle, German airborne soldiers successfully managed to  occupy the Maas bridges near Rotterdam and the Moerdijk bridges near Dordrecht, as well as the airbase Waalhaven. Nevertheless, the aerial assault near Den Haag ended with a victory for the Dutch, as Dutch troops managed to reclaim 3 airbases near the city.

The most important theater of war in the Netherlands during the may period of 1940, however, was North-Brabant. This is also were the German 9th panzer division started their objective of relieving the German airborne troops in Fort Holland. The Allied troops had a similar goal of reaching the Dutch defense lines through North-Brabant. Consequently, immediately after the German invasion became known, the French sent the troops of their 7th army division to Breda and Tilburg.

The Dutch army, however, offered little resistance in the southern regions of the country and the third army division and the ‘Light’infantry division had to fall back to the northern regions, located above the central rivers. On may 12th, the German tanks successfully reached the airborne troops near the Moerdijk.

The Battle for the Grebbe line

On may 11th, the Grebbe line, located in the center of the country was attacked. After intense fighting, a German breakthrough took place after which the Dutch army command evacuated the important tactical position on may 13th. Nevertheless, the German occupation in the north of the Netherlands was stopped near the defense line of Kornwerderzand, located at the start of the Afsluitdijk.

Despite their successes, the German headquarters didn’t deem the progression of the Dutch occupation fast enough. Their attack on Rotterdam was staggered and as a result the Germans decided on may 14th,  to bombard the city from airplanes. The attack created a sea of fire, consequently burning down over 24.000 residential buildings, 32 churches, and 2 synagogues. Approximately 800 people died and 80.000 inhabitants of Rotterdam became homeless.

The Netherlands surrenders, but the battle continues in Zeeland

In the meantime, the government and the Dutch royal family had already left the country. General Winkelman, the commander in chief of the air- and land forces, pressured by the  threat of the German occupant with regard to more bombardments on Dutch cities, decided to opt for surrender on may 15th.  During the five days of battle in may 1940, 2.200 Dutch soldiers died in addition to the 2.700 wounded. The number of deceased Dutch civilians was approximately 2.000.

The province of Zeeland and the Dutch navy were the only ones exempted from the capitulation. The French, who came to aid the Dutch and entered our country through Belgium and Zeeuws-Vlaanderen, continued the battle in Zeeland.

The German Waffen SS units received the order to overrun the last remaining part of the Netherlands which was not yet occupied. Despite pressure from the local Dutch government, the French allies refused to forfeit the fight in Zeeland. After the abandoned Bathline was broken on May 15th, the German troops advanced into Southern Beveland. However, the advance was stopped at the Sloedam. As a result, the Germans directed their firepower at Middelburg. Consequently, the French then retaliated by firing on the German positions.

After the horrible events of Friday May 17th 1940, the consequences of the bombardments became clear. Luckily, Middelburg only sustained approximately 20 casualties. Moreover, the total amount of casualties was relatively low due to the advice of evacuating the city, on account of the mayor, Mr. Dr. J. van Walré de Bordes.

The material damage, however, was enormous. A grand total of 573 buildings (residential buildings and companies) plus 18 public buildings were destroyed. As a result, 800 people from Middelburg became homeless.

The list of demolished stores and miscellaneous business premises  included:

Highlights of the city, now demolished

Some of the most beautiful buildings of the city were included amongst those that got destroyed. For example, one of the buildings which got entirely destroyed was the 19th century “RK Petrus and Paulus” church in “Waterstaats” style dating back to 1846 and located in the “Lange Noordstraat”. Luckily enough, the pastor was able to save the famous  15th century painting depicting Mary from Den Polder.

Other examples are the “In den steenrotse”, originally build in Flemish Renaissance style dating back to 1590 and located near the “Dwarskaai” as well as the “Gouden Sonne”, a restaurant near the “Lange Delft” dating back to 1635. Additionally, the The “Oost-Indische Huis” constructed with a façade dating back to 1711, situated near the “Rotterdamsekaai” and the community center “De Globe”, built in 1661 were also demolished. Finally, the “Waalse” church, the “HBS” school in the “St. Pieterstreet” and the “St. Jorisdoelen from 1582 near the “Balans”, similarly did not survive the bombardment.

The “St. Jorisdoelen” were later rebuilt at its original location. Initially similar plans were made to restore the heavily demolished provincial library in a building called the “Dolfin” build in 1733 and located in the “Lange Delft”. Prior to the renovation parts of the façade were put in storages, however they were reused in 1998 towards a different purpose when artist Ko de Jonge attached the fourteen pieces of rubble to the streets as “stenen des aanstoots.” (Dutch proverb in which the stones symbolize topics which cause offense.) As a result of the destruction of the provincial library, more than half of the collection was ruined, 160.000 books were burned while 20.000 books which were stored in the basement sustained water damage in attempt to extinguish the fire.

Tears in the eyes

The medieval center of Middelburg, with its small-scaled pattern of streets and its many remarkable monuments disappeared at once. One of the inhabitants of the city wrote: “The destruction is so enormous, so thoroughly, there are no words to express this and there’s tears starting to fill up your eyes. Everything you see is destroyed beyond recognition. Heaps of ruble and even more heaps of rubble. Mountains of stones, blackened walls, smoking wooden support beams turned to coal, crooked, twisted and distorted iron beams, rods and tubes, it’s terrible!’

The reconstruction of the city center of Middelburg was an enormous challenge. Nevertheless, mayor Van Walré de Bordes remained optimistic: ‘We can re-built Middelburg even more beautiful than it was before!’ However, all plans which were made to re-built the city were still subjected to the positions of the German occupant.

The eyewitnesses of the bombardment are starting to age. Therefore a commemoration was organized in may 2010, enabling them to commemorate the event together.

The commemoration, entitled the “Forgotten Bombardment”, was devised by the “Adriaan van Westreenen” organization. Mr. C.J.P. van Westreenen, who died in 2014, was the founder of the organization and witnessed the bombardment on Middelburg when he was fourteen year old boy. The planning of the commemoration was lead by the Zeeland Archives and the municipality of Middelburg. Finally, to accompany the event, a book was published.

This book titled “Middelburg may 17th 1940, the forgotten bombardment”, provides the reader with a completely new perspective on the destruction of Middelburg. New sources and research in both the Netherlands and abroad, create significant new insights into the military decisions made by the German, French, British and Dutch troops. The consequences for the civilians and the city life are described by various sources from the archives and collection of the Zeeland Archives. 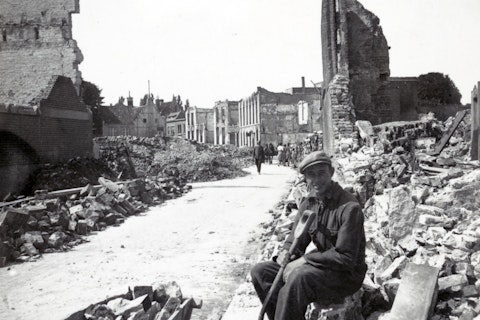 Middelburg after the bombardment, photographed by C.P. Snijders

The capital of Zeeland which was destroyed during the war as photographed by Corneel Pieter Snijders in the summer of 1940.