War in Zeeland - the diary of Janke Terwal

One word is enough to describe the situation on Friday may 10th 1940. “War!”, Janke Terwal, director of the infirmary in Middelburg, writes in her diary. Ms. Terwal elaborates on how the war in Zeeland, during its early and final years, influences the daily life in the infirmary. Her diary is now also available to the public online.

Ms. Terwal extensively reports the chaotic days on the island of Walcheren after the German army invaded the Netherlands. The staff of the infirmary at the “Noordpoortplein” in Middelburg tries to prepare themselves as best as they can for the future that lies ahead. “The Military Staff supervised by Dr. Koch takes all kinds of military precautions, a column of  Red Cross personnel approaches, nurses and the personnel of the Red Cross are filling up sandbags.”

… husband and daughter already passed away

The first victims, amongst which a family from Nieuw and St. Joosland, are brought in on Sunday May 13th. “The wife returns home on her own after a few hours. Her home was destroyed, and her husband and daughter had already passed away”, the director writes. “Even a spy? Who was shot on the streets, is brought in mortally wounded.”

Are we trapped on our islands?

The fear and confusion increases every day, especially when The Netherlands (with exception of the province of Zeeland where the French continue to fight) surrenders on May 14th.  “Zeeland is cut off from everything”, Ms. Terwal writes desperately. “We cannot believe all of this yet. […] Are they forgetting about us, are we trapped on our islands? […] Are the Germans approaching?”

On Wednesday May 15th the air-raid siren sounds, the train station and its surroundings are bombed and once again civilians are hit. “Tension rises on Walcheren, which has to keep on fighting. We are trapped, the island is flooded with Frenchmen who occupy Zeeland and entered the area in Vlissingen after crossing the Scheldt at Breskens.” In the afternoon the infirmary had to be evacuated and moved to Zeeuws-Vlaanderen. The boat, which recently helped the French soldiers enter Zeeland, now embarked on a dangerous trip back to Breskens and onwards towards Oostburg.

What will become of our beautiful island?

On Friday night May 17th the director and the nurses receive word from a ‘sad and defeated looking group of refugees’ on how Middelburg was destroyed. The refugees seek shelter at the school where the infirmary staff was housed. “The refugees turn out to be the pilots from Vlissingen. They managed to escape the harbor area where buildings and oil tanks alike burned down. With their own little ships, they sailed across the dangerous Scheldt river. […] The stories they tell us are increasingly confusing. They tell us about how Middelburg has been bombarded, and how fires broke out on all sides of the city. […] Walcheren seems to have surrendered. The news is overwhelming, there is so much misery and desperation; What will become of our beautiful island?” 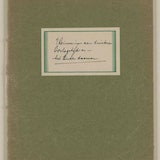 Collection of Documentation on the Second World War

The diary of Janke Terwal, the director of the infirmary in Middelburg, has been added to the Collection of Documentation on the Second World War 1939-1946. It is indexed with inventory number 47.