One of the first Biodynamic farms in the Netherlands was founded by Marie Tak van Poortvliet, in Zeeland in 1926. She named the business Cultivation Company Loverendale after her villa in Domburg. Marie Tak’s memoirs about the years of pioneering after the foundation sometimes paint a staggering image.

Marie Tak van Poortvliet (1871-1936) was a avid anthroposopher. The anthroposophy is a philosophy, or, in the words of its founder Rudolf Steiner: “a path to gain insight, which aims to connect the human spirituality with the cosmic spirituality”. One of the practical usages was ‘Biodynamic Agriculture’ as developed by Steiner (1861-1925).

In addition to organic fertilizing, the organic-dynamic farming works with preparations in which the ‘powers of the cosmos’ are assembled to stimulate the growth of the crops. Marie Tak van Poortvliet founded the Biodynamic farming company L.C. Cultivation Company Loverendale (N.V. Cultuur Maatschappij Loverendale) in 1926.

From her father, Marie Tak inherited farms and estates in Walcheren and Brabant. The access to these properties was according to her “für jeden Anthroposophen der Grund besass eine absolute Pflicht.” She saw the farming itself as a logical step. In her memoirs, she reports that her grandfather was already concerned with agriculture and that her great-grandfather founded an agricultural school in the Napoleonic age. As a minister, her father had improved agricultural education.

When the first farm – Hof Ter Linde in Serooskerke – would be freed from charges in 1926, a director of the anthroposophical center in Zwolle visited to inspect the soil.

Subsequently, Marie Tak founded a limited company to ensure that the company could live on after her death, “da meine Verwanten keine Anthroposophen waren und also die Sache stoppen wurden.” She sold her goods to the L.C. Cultivation Company Loverendale and kept the majority of the shares. Dr. Ehrenfried Pfeiffer (1899-1961), former director of Rudolf Steiner’s biochemical laboratory, was appointed director.

The first one to cancel the debt was Hof Ter Linde’s farmer. When the farmer heard that his son would not be capable of continuing the farm to his heart’s content, he decided to carry on for a few years. Thereupon Marie Tak proposed to start her own garden in Domburg. That first summer, she dedicated herself entirely to the production of preparations. To still provide livestock farming, she bought land in Oostkapelle to build the Jacobahoeve, named after her late friend and artist Jacoba van Heemskerck (1876-1923).

These years of pioneering would become years in which money was spent generously, despite the financial crisis. Even though Marie Tak had not enjoyed agricultural education, she knew the land and the people better than the German managers. “Da noch Herr noch Frau Binder [farm managers] die Sprache verstanden gab es Schwierigkeiten mit der Bevölkerung.”

Disappointments followed each other in rapid succession; the build of a new barn which became too expensive, the futile breeding of rabbits, the cultivation of flowers which was doomed to failure. Marie Tak describes each of these incidents in her memoirs, as well as the difficult mutual relationships.

…the results were there

Against all odds, Cultivation Company Loverendale achieved results. In 1933, the company supplied amongst others bread (six types), speculaas, rusk, vegetables, fruits and potatoes. The name Loverendale would become the standard brand name for Biodynamically produced groceries. It is still in use today.

Despite all hardships, Marie Tak’s support for Loverendale never withered. As a result, she became financially dependent on the company, something she had never intended. She adapted her way of life, but was without a penny from time to time, like in April 1934: “Als ich reklamierte, hiess es war nichts in der Kasse und ich müsste warten bis etwas eingekommen ware; […] ich solle übrigens nicht so an Geld hängen aber denken wie schlecht unser Leute bezahtl wurden.”

The meager state of affairs even necessitated the sale of the Jacobahoeve and villa Loverendale. At the time, Marie Tak had already been living in Switzerland for years. There she died aged 65 in 1936, her sole heir the L.C. Cultivation Company Loverendale.

After her passing, an article about her was published in the anthroposophical magazine Vruchtbare Aarde. “She was very lonely during the last years of her life”, according to the author who observed her during a company visit at Hof Ter Linde. “She humbly stood in the back of the audience, listening to a declaration regarding the origins of this work, in which her name was not mentioned any longer. It was as if time had erased it by now”. 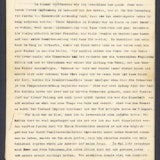 Although the conclusion and the name of the author are missing in the German memoirs, they are, based on many details, most likely the work of Marie Tak. The memoirs are accessible online. Under inventory number 462 they are part of the Archief Familie Mathias-Pous-Tak van Poortvliet.